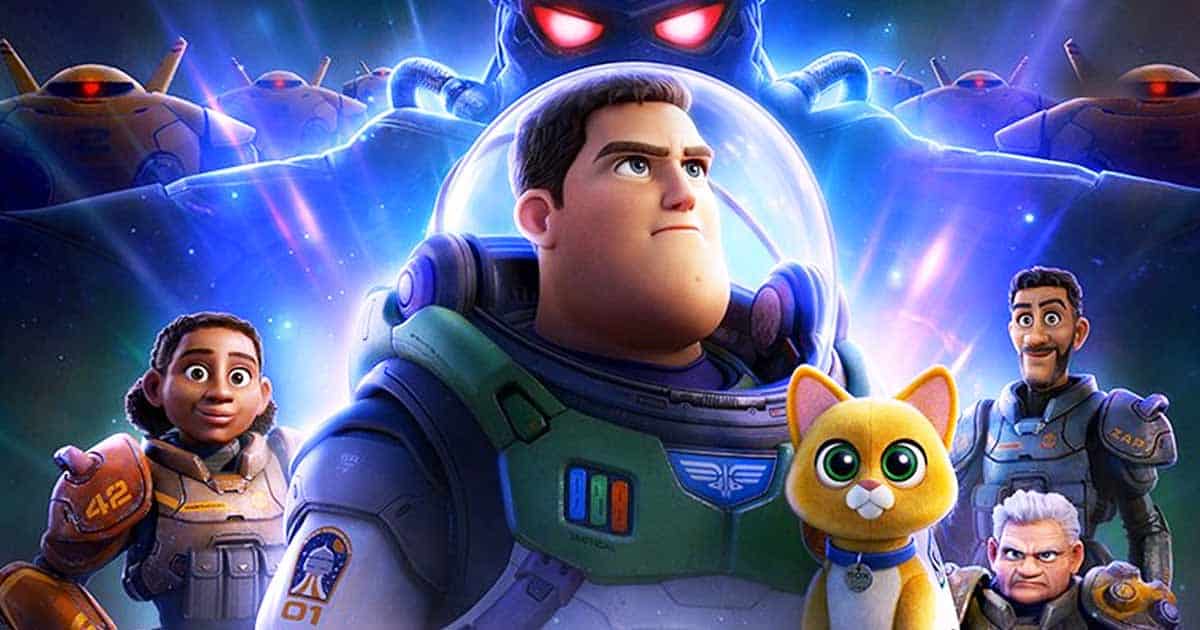 A space mission below infinity

Buzz Lightyear (Chris Evans) wants to get his crew home after being marooned on an uncharted planet. As he volunteers for hyperdrive space tests, everyone around him ages four years per landing. In the process, Buzz loses his best friend, Alisha Hawthorne (Uzo Aduba) but finds her granddaughter Izzy (Keke Palmer) battling the evil emperor Zurg (James Brolin).

Toy Story is one of the most important movies in animation history. It pioneered Pixar’s computer animated features with a simple story chockfull of beloved characters. One of them is Buzz Lightyear, who thinks he’s a real space ranger. The character proved so popular that the tv series Buzz Lightyear of Star Command created a vast universe where humans, robots, and aliens coexist to protect the galaxy from the same threat voiced by Newman from Seinfeld. However, the series is not available on Disney Plus because the company does not acknowledge its existence outside of the Disneyland ride Toy Story Mania.

This failure to acknowledge the series is part of the problem in this generic origin story. It has its moments, but it falls short by both normal standards and the Pixar standard. The best parts are in the opening when Buzz reacts to everything changing around him. It’s heartbreaking to see him lose everyone he knows while he doesn’t age a day.

But after that, everything falls into the typical team-building adventure with clueless, one-note sidekicks until things get serious. As stock as the rangers were in the 2D movie, they had more personality compared to this crew, minus the robotic cat Sox (Peter Sohn). Chris Evans is at least on par with both Tim Allen and Patrick Warburton as Buzz. He captures the seriousness of a man too dedicated to his mission, yet also the vulnerability when he loses everything. But therein lies a problem with the main lead. In the Star Command pilot movie, Buzz dealt with his stubbornness after losing a close friend, which led to strong character development with his new teammates. Here, he’s too nice to learn any lesson. There could’ve been so much development on sacrificing his personal life for the mission while everyone around him lives in the moment. Instead, most of the time is dedicated to the awkward team rather than the emotional turmoil of a lonely space ranger. Taking an observation from Lisa Simpson, there’s not much of an emotional journey to complete. Also, there is a twist concerning the villain that’s an admirable risk, but it does not make sense even by cartoon logic. The rest of the cast isn’t bad, they’re just written one dimensionally without any natural growth. In short, this multimillion-dollar origin story is more stock than the 2D straight to home media entertainment from the early 2000’s.

The animation is the usual Pixar polish that brings the characters into a down to earth style. Going back to the original Toy Story, it’s amazing how much computer animation evolved in 25 years. It aids the action sequences that, unlike the story, goes to the stars and back in presenting space travel, hostile creatures, and future technology. Though one wonders how Andy in 1995 would react to 2022 computer animation. This is apparently the movie that fueled his desire for the toy, but it’s hard to buy that outside of the detailed animation

Lightyear is an enjoyable yet generic adventure of one of the most iconic Pixar characters. The realistic animation is top notch, the voice acting is serviceable, the action sequences are a spectacle to behold, and the opening act showcases the most dramatic moments. But its inability to capitalize on both a vast world and its lead character is a huge letdown for one of the biggest brands in animation. On a side note, the “controversy” involving a same sex kiss is completely overblown. It boils down to a blink, and you’ll miss it moment that didn’t need all the toxic publicity surrounding it. The fact that this got a theatrical release over Turning Red, based on its branding, speaks volumes of how little faith Pixar has in its new generation of animators. That is to say, there’s nothing wrong with streaming services given how much they’ve changed the entertainment industry. But if this is supposed to be the movie that peaked Andy’s interest in the toy, then he has my pity for skipping out on Buzz Lightyear of Star Command. Let’s hope that Woody gets better treatment if Woody’s Roundup is on the horizon.

What did you think of Lightyear? Who’s your favorite Toy Story character? Whatever your thoughts are, comment and discuss with others.

The Hollywood Reporter – ‘Lightyear’ Producers Say That There Was A “Definite Pushback” to Kiss From Disney | THR News: https://www.youtube.com/watch?v=nDHa4i0mQWc

One thought on “Lightyear”