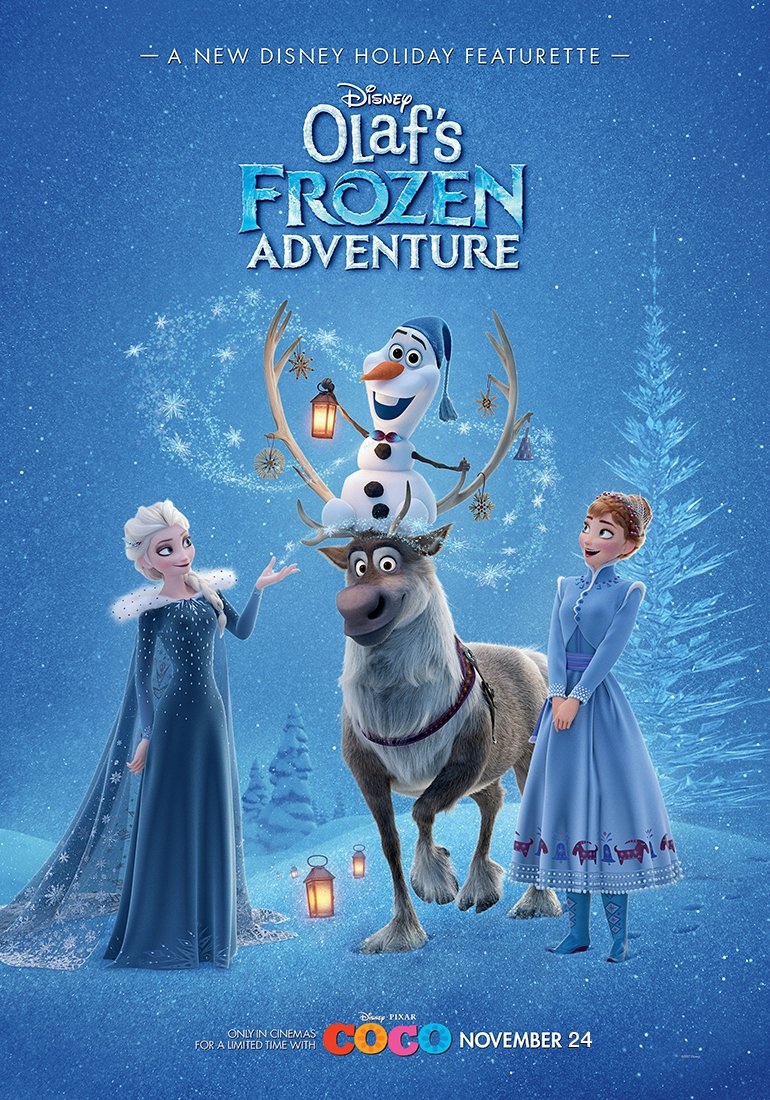 A couple years ago, Coco was released in theaters during the middle of the three month holiday season. That being Halloween, Thanksgiving, and Christmas. But before the tears started to flow at the sound of Remember Me, there was a wave of confusion that engulfed audiences in both America and Mexico. Many believed they walked into the sequel to Frozen rather than the colorful world of the dead. While not too far off, it was actually Olaf’s Frozen Adventure. A 22 minute short originally intended for television, it was given a theatrical release because Pixar didn’t have their own short to pair with Coco. Since then the short’s been detested by modern movie goers and even Disney fans turn their nose up at it. But is it worth all the hate? Absolutely not. Olaf’s Frozen Adventure works as a preceding short and on it’s own merits, though it’s not without its flaws.

The idea of a short film goes all the way back to the birth of cinema. During the golden years of Hollywood, theaters would usually play a news reel, trailers, and a theatrical short, either animated or live-action before classics like Casablanca. This is why the animation in the original Looney Tunes is more fluid, because they were made for theaters before the invention of television. In fact, some of the most notable Oscar contenders for best animated short like Knighty Knight Bugs and Mickey’s Christmas Carol were played in theaters before the feature presentation. Some of these shorts even differed in run time because back then, 21 minutes was still acceptable for a short. Studios like Pixar have spent 20 years carrying on this practice before their highly anticipated movies starting with A Bug’s Life. Although the recent Toy Story 4 broke said tradition for the first time with the arrival of Disney Plus and the sparkshorts program. However like many Pixar films before it, Coco survived on its own merits thanks to word of mouth, which has been the backbone for the company’s financial success ever since they broke beyond their advertising gigs to make the first full length computer animated feature. But over the years the preceding short has become a lost art as modern audiences now have different outlets to access these tiny treats. But I fail to understand how people were confused by the presence of the short when it was heavily marketed to play before Coco. Even the poster’s fine print made it clear that it would only play for a limited time before airing on ABC. Thus debunking the theory that Disney pulled the short due to the negative reception, not helped by accusations of racism by trying to eclipse an ethnic feature with Caucasian characters. Nowadays, shorts are usually animated and run at a maximum of six minutes. And if you want to see them all, they’re relegated to a special screening in select art theaters as a compilation package before the academy awards. Though platforms like Netflix are making them more accessible to the common movie buff despite the actions taken by the likes of Steven Spielberg. But considering how much inflation has upped the price for a movie ticket, Disney only wanted to give its audience something extra for financially supporting their films. Gaming companies these days use a similar method by including pre-order bonuses as a reward to those who buy their games upon day one. Especially the collector packs.

What I will agree with on the backlash the short faced is the release in Mexico. Unlike the United States, Coco released in Mexico during October, the time where day of the dead is a very prominent holiday. And in retrospect, it seems very out of place to pair a movie about one of the country’s most celebrated traditions with a Christmas special. Over the years, there’s been a growing stigma against shopping centers for playing Christmas music before Thanksgiving is over. This is an example of that in cinema form and a reminder that maybe it could’ve been paired with Wreck-it-Ralph 2 since that released a few weeks before December worldwide. Aside from that, it was nice for Disney to include an extra feature to go with a modern classic, which brings us to the short itself.

It’s the first time in forever that Anna and Elsa (Kristen Bell and Idina Menzel) get to celebrate Christmas together. But once everyone goes home to their families, they realize they have no traditions from the years of isolation. Determined to bring happiness to his family, Olaf (Josh Gad) sets off to find new traditions all over Arendelle to bring back to his united creators.

As you can tell the sidekick gets the spotlight, and a good chunk of your enjoyment is determined on whether or not you like Olaf. However his charm comes from the endless curiosity for the holiday and how he wants to do everything he can to cheer up Anna and Elsa after their lonely history. So he is one of the more useful sidekicks compared to others that can’t even hold their own short film. And if you’re not a fan, there’s plenty of times where everything blows up in his face, which is both hilarious and bittersweet. Almost like a reincarnation of Wile E. Coyote.

For a special surrounding Christmas, it’s unique to have someone seek out traditions instead of presents. This re-enforces the notion from The Grinch that Christmas comes from more than just a store. That also extends to Anna and Elsa when their backstory is expanded from childhood to present day, and how they deal with moving on. There’s even a few nods to other holidays like Hanukkah, which hasn’t been represented in 20 years from the likes of Rugrats. if anything, the only downside is there are moments where it feels like it’s advertising toys for the future. I can see an Olaf doll with a candy cane nose on shelves after seeing this special as well as other forms of characters like Oaken.

The animation also hasn’t lost its touch as it paints Arendelle with a more welcoming winter atmosphere than the icicle drenched original. Despite the freezing climate, there’s a lot of warm lighting and colors surrounding each household engulfing each diverse tradition. The character animation sees more experimentation as the short progresses. Animals are very hard to express with their blank faces encompassing every emotion, but the animation really toys with Sven and Olaf’s anatomy here and there. Especially during a charades scene, which should be a tradition with everything Frozen at this point because they stand out so much.

It also wouldn’t be a Christmas special without some enjoyable tunes with Elyssa Samsel and Kate Anderson composing some delightful songs. That Time of Year is one of the standouts as Olaf goes door to door looking for traditions and it even leads to some unexpectedly dark punchlines. Then there’s Ring in the Season and When We’re Together which ties the knot on the development between Anna, Elsa, and Olaf at the beginning and ending with a cheerful conclusion. Tie all these elements together and you might just get the perfect recipe for a joyful Christmas cartoon that will hopefully play alongside many other holiday icons for years to come.

It probably should’ve been attached to something like Cars 3 or Wreck-it-Ralph 2: Ralph Breaks the Internet to offset any bad publicity connected to racism. But other than that, Olaf’s Frozen Adventure is a satisfying holiday special that joins the ranks of those that came before it. Sure there are blatant moments of commercialism, but behind that is the usual grand Disney animation, songs that ring like the jingle bells on a sleigh, and a sweet message behind the idea of branching out into new traditions. And now that it’s not paired with Coco on Disney Plus, people can judge it on it’s own merits and see if it brings out the Christmas spirit within them. It’s possibly the only time a cold blanket of snow will bring you warmth this holiday season.

What do you think of Olaf’s Frozen Adventure? What’s your favorite holiday short? Whatever your thoughts are comment and discuss with others.

The Last of Us Part 2 Pre-Order Bonus Revealed: https://www.gosunoob.com/the-last-of-us-2/pre-order-bonuses-special-editions-revealed/