Next year will see the 50th anniversary of one of Hanna-Barbera’s most popular shows. And with Halloween on the way, why not look back on one of the most iconic moments in the history of this dog’s life?

Scooby Doo! Where Are You enjoyed a successful run since 1969, but was growing stale since every episode was exactly the same. Scrappy Doo helped in the short run, but has since been detested by the fans. Even Tim Curry refused the role that Rowan Atkinson played in the 2002 live-action edition purely out of hatred for the puppy. By the time the 80’s were coming to a close the only show keeping the series afloat was the Tom Ruegger headed spin-off A Pup Named Scooby Doo. Standing out from the clones of Muppet Babies while also revitalizing Mystery Incorporated. Aside from that it was clear that some new direction was needed if Scooby was going to keep up with the times, and not in the same way of every big blockbuster forcing the most dated computer effects down our throats. Enter Scooby Doo on Zombie Island, the first of four straight to DVD movies starring the very hungry canine that was actually the result of a repurposed episode of the then cancelled Swat Cats series.

It’s been a few years since Mystery Inc went their separate ways. Daphne and Fred (Mary Kay Bergman and Frank Welker) have their own reality show, Shaggy and Scooby (Billy West and Scott Innes) are airport security and Velma (B.J. Ward) owns her own bookshop. As a surprise for Daphne’s birthday, Fred reunites the gang on a New Orleans trip to find real paranormal forces to record for their show. Their curiosity is answered by Lena Dupree (Tara Strong) and her anti-dog employer, Simone Lenoir (Adrienne Barbeau), who owns a haunted mansion in the middle of a bayou. 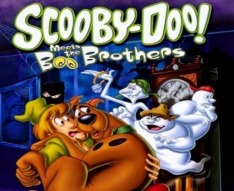 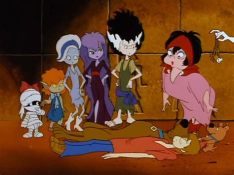 Past incarnations have attempted to encompass real ghosts and monsters into the mix (including one with Vincent Price), but this is a reverse psychological brain jolt on the light-hearted comedic tone. The typical formula such as slapstick, kitchen raiding and guilty pleasure montage songs only lasts to a certain point before venturing into uncharted territory. That’s where the mystery becomes more layered than just dangling red herrings and the “meddling kids” catchphrase at the end. The monsters aren’t just real, they’re hiding much more beneath the surface. And that’s the story in a nutshell. Familiar and simplistic, but pushed beyond the boundaries when diving deeper into the rabbit hole.

The enhanced production not usually associated with Hanna-Barbera certainly found an odd home in a direct to DVD release. Drab colors in animation are dangerous for a medium with more endless possibilities than live-action, but they serve a purpose when the moon rises. What was once suitable on Saturday morning for kids, transforms into a gothic museum brimming with chills and fluidity as the zombies plague the bayou. Their eyes lifeless yet go out of their way to convince you that they’re reanimated. Their torn clothes and toothless grins echoing vibes of sorrow and menace after rising from the grave. And the dynamic shadowing brings a movie quality improvement to the deli-sandwich budget from years past. The traditional comedic style has their own stage time, but gradually diminishes as the sun sets, never overlapping with the dark angles in an uncanny valley trap. For those who really wanted the series to go all out in the horror department, this is the animated equivalent of Rick Baker and Edgar Allen Poe.

For the first time in their adult lives, the characters are actually three dimensional. Fred has a personality other than his orange ascot: he enjoys gourmet foods and in some ways is a bit sleazy when  peeling back the leadership role.  Velma, Shaggy and Scooby are relatively the same for better or worse, but their antics and arcs still make up for their simplistic additions. But it’s Daphne who’s hatched from her cocoon, graduating from the pretty damsel to a fully fledged adult with her own career and friendship circle. Of course who could forget the voice cast that would go on to play many animated characters from here on out? Despite Frank Welker being the only original cast member to return, the then new comers brought their best foot forward filling in the shoes of veterans like Casey Kasem.  Scott Innes as the perfect heir to Scooby Doo after Don Messick sadly passed away a year prior. Billy West channeling his prototype Phillip J. Fry in Shaggy. Mary Kay Bergman adding a lot of energy to Daphne’s posture and vocabulary. That’s not even mentioning guest appearances like Jim Cummings and Mark Hamill (Luke Skywalker).

Scooby Doo on Zombie Island still remains one of the quintessential favorites (that’s for another day) of the franchise for both loyalists and newcomers. The story and characters finally take the plunge in new directions that adult fans wanted to see for a long time and the animation is given the proper care and attention to detail that put Hanna-Barbera back on the map. What’s surprising is this was released straight to physical media a few months before The Rugrats Movie made theatrical cartoon features a profitable trend. If given more of a budget and a bigger marketing platform (Warner Brothers had a hard time marketing their animated catalog during the 90’s) this would’ve been a pioneering money maker at the box-office, unlike the soulless Raja Gosnell live-action disaster. But grab your favorite candy, costume and add it to your horror movie marathon this year no matter your age. Somewhere in here, your heart will stop at the site of an unmasking gone wrong.

Which one’s the man in the mask?

What did you think of Scooby Doo on Zombie Island? What’s your favorite Halloween candy this time of year? Comment and discuss with others! And if you enjoy reading our content, Like Follow and share our website/social media page with family and friends!

This is TheCinematicBandicoot wishing everyone a Happy Halloween this October!!!! Stay safe when Trick-or-Treating, indulge in a lot of horror content and keep your favorite candy close by!!!!!!