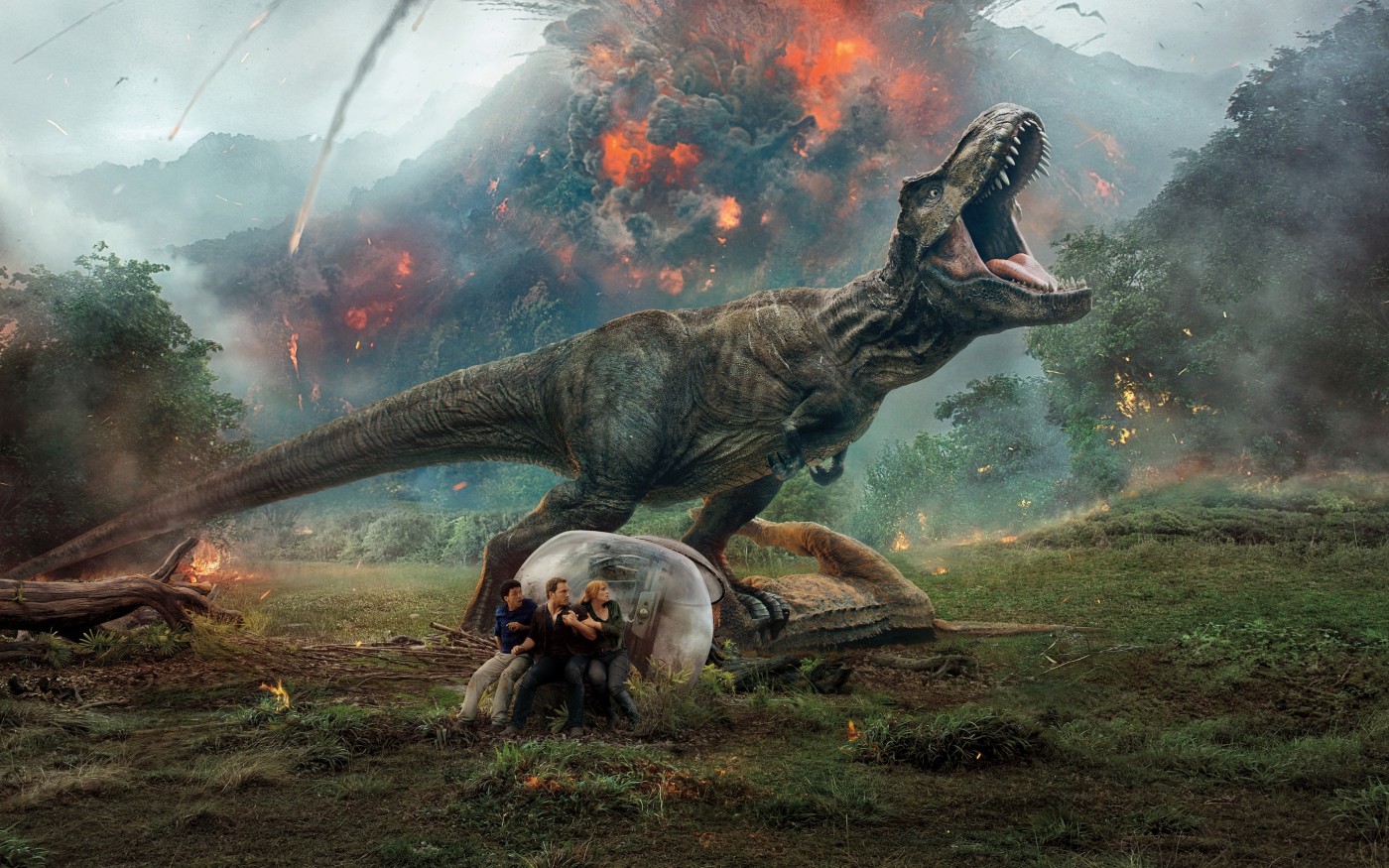 The rides are forever closed, but the dinosaurs roaming the now devastated Jurassic World face a new extinction at the hands of a volcano. Caught between animal rights activists and Jeff Goldbum, Claire (Bryce Dallas Howard) and Owen (Chris Pratt) are sent on a mission to rescue the surviving species from mother nature’s correction course, including the Cesar of velociraptors, Blue. What they don’t know is the basement plan to auction off the weaponized creatures of mass destruction to the highest bidder.

Ever since Michael Crichton was cornered by fans to commission a follow-up to his popular book, nothing’s ever come close to what was accomplished 25 years ago on page or by director Steven Spielberg. And even the master of cinema had trouble replicating that same success. The sequels weren’t completely awful, but definitely deteriorated with each new entry until Jurassic World answered everyone’s question: What if the park did open? Which is why this will be compared to both Jurassic Park and the less than rosy sequels separately.

Director J. A.Bayona (The Orphanage, A Monster Calls) knows how to handle horror and in some ways expresses creatuve freedom to the worn out franchise, particularly in the opening when flashes are used to give a glimpse of what’s lurking in the shadows. Meanwhile, Michael Giacchino is slowly becoming as big as John Williams with every score he conducts. As for everything else the actors are fine for what they’re given and some of the themes beg to be explored rather than come off as black and white.

Unfortunately without the park there’s barely any reason to go back to this outside of making money, the dinosaurs and sequel baiting for what should’ve been this installment’s focus. Instead the plot takes the characters and reboots them back to square one, or inserts newcomers with little to no purpose. If they were half as engaging as the cast in Sense 8, it’d be a warm welcome, but what it boils down to are empty millennial jabs, cartoony business suits making worse decisions than a curious child, the same characters with repeating arcs or new players replacing veterans. In between all the mayhem is a plot twist that has no effect on the story until the end and even then it’s incredibly contrived without spoilers even if the trailer already accomplished that. Speaking of which, are you waiting for Jeff Goldblum to come in and save the day? Too bad! He’s relegated to a intro and book-ending speech despite appearing in many promotional interviews. Want more? This wants to have its cake and eat it to with the animal rights angle. How do you make carnivorous, human-devouring monsters empathetic? You can’t with a horror approach, unless it’s following in the footsteps of Saw and we’re supposed to cheer for the activists dooming all of humankind with self-accomplished extinction. If it didn’t work in The Lost World what makes you think it’ll work here?  For all the problems Jurassic World had, there were a variety of locations to explore and scenarios. Here, the locations are compacted and rehashed in the two hour span. Maybe that was the intention, but why go through all the trouble setting up what you could do later? Shouldn’t you focus on the now and present? With all that said where the ending goes in a promising conclusion that’ll hopefully be utilized to its full potential in the future. Too bad the road to that ending isn’t worth the wait. And it distracts from the incredible blending of animatronics with digital technology on par with the original.

After seeing this, it’s no wonder director turned co-writer, Collin Trevorrow lost his gig directing the next Star Wars chapter because this property is right back where it ended 17 years ago minus the talking raptor. Jurassic World: Fallen Kingdom is an abysmal mess that, while having more memorable moments than its predecessor, has no reason to exist if it wants to bait the audience rather than feed it. By Jurassic Park standards, it’s an HD remake of The Lost World right down to the animal rights scenario backfiring on too many levels. By sequel standards it improves on the monster moments, but is just as mediocre as the others extendning 30 mintues longer than Jurassic Park 3. Granted there were cheers, gasps and laughs in screening (whether unintentional or not can’t be answered) so there is a crowd that’ll be amused by it. But if you want the best of both worlds as an individual seeker of quality, either watch the original or play the Dino Crisis duology because something should keep your brain’s attention for the next three years until the next installment joins the billion dollar club by taking the science out of science-fiction.

What did you think of Jurassic World: Fallen Kingdom? Leave your comments and discuss with others!