Marvel’s Spider-Man, developed by the magnificent talent at Insomniac Games (Spyro, Ratchet and Clank and Resistance) might not only be the best interactive Spider-Man experience, but the definitive media of the web-slinger after Sony spent nearly 20 years pressing the reset button. This will go into great detail on every improvement this makes to both the past movies and games, including the story which doesn’t hold back from running the gambit. So SPOILER ALERT if you haven’t beaten this yet! Go play it and then comeback to read the rest of the review.

Brushing aside the origin story, Peter Parker is out of college and living his scientific  dream job for the good of mankind. If only he could pay his rent on time and properly cook dumplings.

The Raimi trilogy has been criticized for being both over dramatic and corny in recent years. Since then every new take has distanced itself from that inception. The romance in the Webb duology was better, but the villains suffered in the long run with the realistic turn and lack of focus. What made Spider-Man great was the ability to balance both witty comedy and relatable growing pains. Peter’s not only funny in the awkward nerd context we can all relate to, but he uses it as a defense mechanism when adulthood rears its ugly head. For example shortly after missing rent the side mission of collecting backpacks provides much backstory to all the sides of Peter Parker: A scientist, photographer, web-slinger, humanitarian, struggling young adult, nephew and decision maker. Though it’s not all punches and kicks. The dilemma of a superhero having a relationship with an active partner is also a breath of fresh air from the fading damsel in distress trope. Furthermore developing Mary Jane and the newly revealed Miles Morales. As for Aunt May she’s the culmination of the best traits of Rosemary Harris, Sally Field and Marisa Tomei as she showcases the best of humanity only to walk away with the last tear before the curtain call. Uncle Ben’s been shot so many times, but nothing outside the comics has ever dealt with that inevitability that could fill a ten gallon jug of water.

Behind the mask is a smorgasbord of fan service that does the rogues gallery justice, leaving a huge impression without feeling straight out of the 1967 series: the Kingpin, Tombstone, Vulture, Shocker, Silver Sable, Electro, Mister Negative, Doctor Octopus, Scorpion and especially the Rhino. Their costumes and banter with one another are part of the excitement after the bombastic prison break. The other is taking on two at a time while they bicker with one another on how to approach the situation. But hidden beneath all that is an onion basket of layers when focusing on Doctor Octopus and Mister Negative. They rival Thanos in both quantity and quality as their true colors sprout above their good intentions. Nothing like this has been achieved since the short lived  Spectacular Spider-Man series.

Clocking in at 20 hours including the side missions, there’s enough to satisfy the most die hard true believers. Redone content is briefly acknowledged so the new material can go in any direction it wants encompassing the entire lore, improving on the few kinks and still being accessible to new comers. Everyone can have their cake and eat it too. 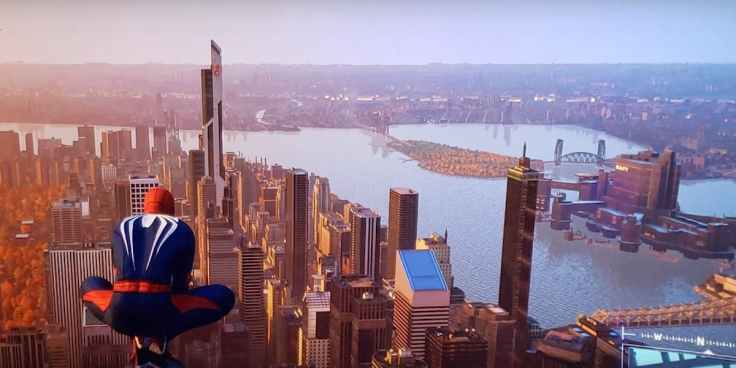 First the elephant in the room. No, the puddles of water aren’t as glossy as the E3 trailer made it out to be, but the apple doesn’t fall far from the tree. If anything the bright colors of New York still hold a candle to the real location. The trees turning orange for fall, the high rise buildings that literally takes web-swinging to new heights and all the Marvel easter eggs like Avengers tower give a sense of familiarity in this isolated timeline. Motion capture is up to snuff with other triple A studios on the regular Playstation 4. However it’s the little things that go unnoticed unless using photo mode. The detailed inside of buildings when wall crawling, the elasticity of webs being stretched to their limits while swinging. It becomes a game of I Spy in the sky and on the ground. The voice actors aren’t pale imitations of expensive celebrities akin to The Amazing Spider-Man game tie-ins. They’re professional in blending with the well known characters giving their own spin whether it’s Yuri Lowenthal’s improvising Parker, Laura Bailey’s determined Mary Jane or even a certain cameo that’s one step ahead when the story hypnotizes you attention.

Not much more to elaborate on except that any bugs that were present at launch have since been patched and it helps in the long run. If anyone’s played this on the PS4 pro feel free to comment on any graphical updates in framerate or textures. It’s big, it’s bright, it’s an HD remake of Treyarch’s Spider-Man 2. And there’s no shame in that.

There’s clearly a lot of inspiration from the Arkham series. From the third person angle to exploring a large city there’s no hiding it. But it’s not a complete clone. If comparing by release date, technically Batman plagiarized Treyarch’s 2004 game with it’s open city and the dodge maneuver (Since when does Bruce Wayne have a spider-sense?). There’s plenty to do around New York even if the book isn’t rewritten. Thinking back to the franchises that jumped on this bandwagon, how many actually worked without over bloating the world? And with Insomniac’s track record of the Ratchet and Clank saga, there’s no shortage of toys to acquire, upgrade and unleash upon those who seek to bring hell on New York. That also goes for the suits which are more than just a cosmetic change, they come with their own upgrades.

The endless goons would normally be repetitive in the long run, but since there’s just enough variety when breezing through the three acts. Other little details like being able to unsubscribe to Jameson’s podcast really adds to the universe immersion. While there are some features that modern gamers can’t stand these days, they can be glossed over with the flip of a switch. Not a fan of quick time events? Turn them off in settings and enjoy the ride. Want to skip some hard science puzzles? Just push one button and presto, get out of class card! Tired of web-swinging from one end of New York to the other? Unlock the fast travel subway and bask in the underground atmosphere. Even the stealth sections with Mary Jane and Miles Morales are handled with extreme care as if the company took all the worst stealth missions in gaming and locked them in an empty boarding school until they learned to behave.

The replay factor is alive and healthy with the auto-save allowing you to go back and replay any of your favorite missions. It’s not a new game plus, but after going toe to toe with the sinister six it’d be a chore to play through the entire game again just to get to one boss battle. With Treyarch now on a Call of Duty streak for the past few years, Activision put their trust in the right developer to fine tune the core gameplay with distinctive perfection.

After nearly 20 years of molding and experimenting from one media to another, Marvel’s Spider-Man is the new standard for all future endeavors of this iconic hero. The story has a perfect balance of witty comedy and epic drama, the gameplay is fine tuned with lots to do in the 20 hour single player campaign and New York itself has never looked better. True believers and new comers alike watch this on Game Grumps, view it on Twitch, but more importantly play it for yourself even if it means camping at your friend’s house for a couple of days. And if there’s ever a future director, television producer or game designer looking to have their vision of this hero a reality, take nots here because this is the Infinity War of Spider-Man media: it might’ve taken a long time to get here, but it was worth the wait.