Out of the ocean of PlayStation 2 gems, Shadow of the Colossus fished Team Ico out of the red after the less than financial critical hit, Ico. Since then, it’s been regarded as their magnum opus that not even The Last Guardian could dethrone. While not headed by Fumito Ueda (oops), Bluepoint Studios has spearheaded the best PS3 remasters during the console’s heyday. And now they’re put to the test by Sony with this remake from-the-ground-up. But can it add anything more besides Fur-K?

Out of the night on horseback rides Wander to a land of isolated greenery and foreign ceramics. Wrapped in a blanket, his lover faces death’s door should he fail a deal made with a spirit: slay 16 giants to bring her back to life or live with everlasting guilt. As if that doesn’t describe the story as a whole when the story unfolds. He might not show any emotion outside of determination, but the game asks How do YOU feel? once the giants tumble to their demise.

What pushed the PlayStation 2 to its limits long ago now rivals a Pixar film. The inconsistent framerate is once again kept at bay while short draw distances turn into postcard vistas. The colossi are bigger than before with fur that might as well be in 3D thanks to ruffling animations when they try to shake you off life like a stubborn tick. Dynamic shadowing is touched upon making the sunlight even more majestic when reflecting off your sword or grass. For all the empty space, it’s very surreal that the land has kept its green waiting for an ecosystem to inhabit the place.

The orchestra once again launches you into the air as it swells with instruments only matched by Fantasia: drums, violins, trumpets, French horns and a choir that brought the kitchen sink. Even the silent, isolating ambiance can speak as loud as the booming sound waves of panic. Speaking of sound, it’s more crisp than ever when your final stab to a monster can abruptly silence a Broadway spectacle. Different hoof print Agro makes on grass, rock and sand leave their own hoof beat upon impact. Whatever budget they had, it was definitely worth building from scratch again.

Come for the graphics, stay for the boss fights because there’s plenty to go around. As an ant in this colored purgatory, you’ll ride your trusted horse friend, Agro, with a compass in the shape of a sword pointing you where to go for the next encounter. The giants themselves are masterclass puzzles of survival with their large blunt objects defending their weak points. Sounds repetitive, but each distinct design never lets up on challenge, which should be tested on hard difficulty because easy doesn’t even show them lifting a finger towards you. With the option to choose between the sadistic classic controls and the easy modern controls, the fights are actually easier than before. But the realism behind the mechanics immerse you in the world even more. Although slaying lizards and shooting down fruit might be trivial depending on your background on the title.

However the biggest missed opportunity in all of this is the exclusion of the cut colossi. For those who don’t know, the original game was planned to house 24 colossi, but 8 were cut for various reasons. They were left out of the PS3 version because it was an upscaled port. This is a full on remake with the processing power of the PlayStation 4. So why weren’t any of them resurrected? It could’ve made this an extended cut giving fans old and new another reasons to drop $40. And I know it’s ironic coming from someone who adored the largely intact Crash Bandicoot N. Sane Trilogy, but that included stormy ascent and new time trials even if the levels weren’t built around them. Aside from reminiscide mode that lets you replay boss battles, not much is here that wasn’t already in the PlayStation 3 edition. Don’t get me wrong this has always been one of my favorite games of all time, but every re-release brought something new to the table. Not all of the cut colossi need to be added. Just the few that benefit variety: Devil, Monkey, Spider and especially the worm. Ueda also mentioned an alternate ending he regretted scrapping for the final release which would’ve been an intriguing special feature separate from the game less it ruin the somber tone of the story. Maybe all this could be downloadable content in the near future or a surprise inclusion for a game of the year edition. 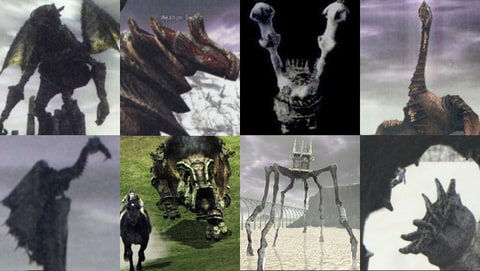 Regardless of personal disappointment, Shadow of the Colossus on PlayStation 4 is still one of the definitive ways to experience a game that now embodies a Pixar graphical update, manageable modern controls and especially a story and setting of Shakespearian tragedy. It’s just saddening to see unused elements once again get scrapped that could’ve transformed this into THE definitive edition. If you’ve played the past two versions, you’re not gonna get anything new. But if you’re going into it for the first time, by all means mount Agro and ride off into the sunrise with sword in hand. And hey, It could be worse. There could be a film adaptation in the works.