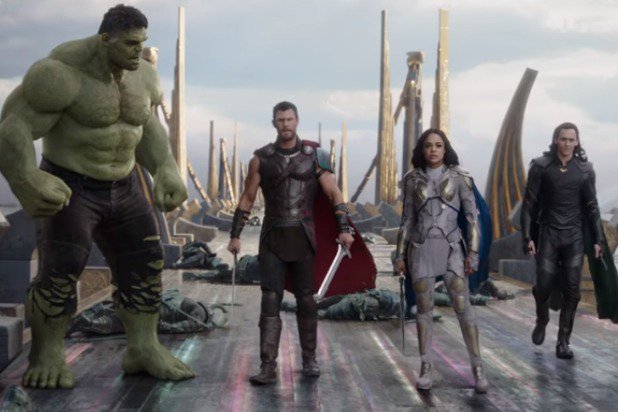 With Odin (Anthony Hopkins) gone, his hidden first born child, Hela (Cate Blanchett) ascends onto Asgard to deliver the prophesied apocalypse Ragnarok. Thor (Chris Hemsworth) and Loki (Tom Hiddleston) try to stop her, but they’re catapulted to planet Sakaar and captured by bounty hunter, Valkyrie (Tessa Thompson). Brought to the Grandmaster (Jeff Goldblum), the god of thunder is shaved, electrocuted and pitted against the reigning arena champion, the Hulk (Mark Ruffalo). Reluctantly teaming up with his trickster brother and the jolly green giant, the group try to escape Sakaar and save their home world from ultimate destruction.

This is definitely the best of the Thor trilogy in design, story and character. Then again, the other two movies have squandered the hero’s potential compared to other teammates in the Marvel Cinematic Universe, so is that really saying much? Yes and no. There’s a double edge sword effect for everything good, so click away now if you’ve yet to see Thor Ragnarok as this will contain spoilers.

Let’s take a moment to be thankful that Earth characters like Natalie Portman and Kat Dennings were finally cut from the growing cast. And the main alumni work very well as a group bouncing off each other and individually creating a multi-genre buddy, prison-break, action, comedy. Chris Hemsworth is let loose with his charm and surprising natural comedic chops underneath his Schwarzenegger build. Mark Ruffalo gives two dual performances for the price of one juggling the Hulk with the mindset of a toddler (His half man half monster persona is a welcome breath of fresh air) and Banner with a constant uncertainty of the worst around the corner. And of course, Tom Hiddleston is back to steal the show as Loki with his cynicism, dedication to slapstick and manipulative personality. Do I even need to bring up  Jeff Goldblum at this point? He gives the performance you know he’ll deliver from Jurassic Park complete with a giant hologram of himself with his traditional Um’s and Ahh’s. But with the growing cast, there’s some that don’t get enough attention like Hela. Cate Blanchett chews the scenery like bubble gum and has a great set-up, but because Jeff Goldblum is the obvious center of attention she gets sidelined to the point where it’s jarring to cut back to Asgard. Granted, her giant wolf is a hidden wonder of the world, but in the end Doctor Strange’s cameo was more memorable than she was. It doesn’t help that Idris Elba is also fighting for a spotlight during his Robin Hood subplot of saving the common folk.  Meanwhile, every new character from Korg to Valkyrie to even the main character are fighting to be the standout comic relief. For the new characters it doesn’t work because they need to be introduced with the rest of the group. Apparently there was a lot of improvising on set and it really show. Sometimes there are hard hitting laughs like when Loki is reunited with the puny god wrangler. But other times they come at inappropriate moments when the drama needs to play out. When Asgard is destroyed in the end it should sink in that the once mighty kingdom is now gone. But instead it’s treated as a unfunny punchline. Imagine if a similar outcome happened when Yandu sacrificed himself in Guardians of the Galaxy Volume 2.

There’s a clearer identity to this adventure when jumping from Asgard to Sakaar and other locations helped by the glowing backgrounds, cinematography and different species populating the universe. When the action gets going, it really gets going, particularly when Hulk smashes all expectations and few corpses are left lying in the training room. And with a giant wolf, there’s bound to be more than a game of fetch with this pooch.

Compared to this year’s comic movies like Logan, Wonder Woman and especially Guardians of the Galaxy Volume 2, Thor Ragnarok comes up a bit short, but it’s still fun on it’s own. I don’t think it was a good idea to turn a serious story like Planet Hulk into a cannon comedy without losing the new twist on the fish-out-of-water trope. But if you can get past the out of place improvising and overshadowed villain, there’s a lot of  world variety and smart comedy that should’ve been present in those first two movies. One thing’s for certain, that Led Zeppelin song will stay in everyone’s head for a good long while.

Note: As for the 3D, you will believe a hammer can fly at your face.