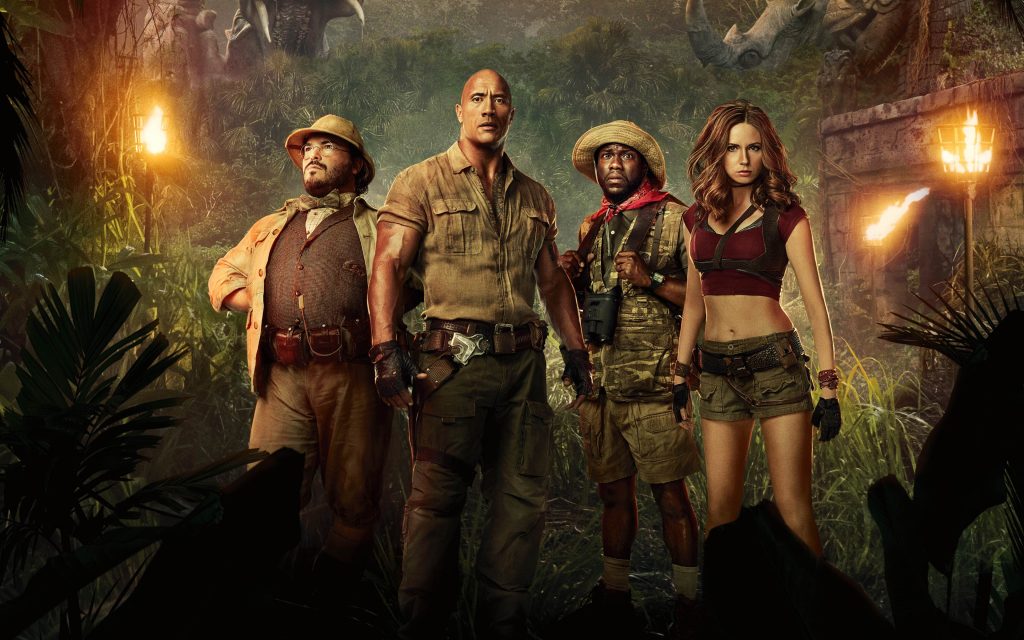 Though I have endless nostalgia for it, the film adaptation of Chris Van Allsburg’s book, Jumanji, was a victim of the mid 90’s special effect craze. A time when the most dated computer animation was valued higher than the best script, though it does have practical effects that hold up. Despite critical backlash from Siskel and Ebert, I’m part of the cult following that it gained over the years for being a quasi-horror adventure for kids. So jumping from that to a comedy saw more than a couple doubts, particularly after Robin Williams’ passing. Yet somehow, this still surprised me on so many levels.

Sentenced to detention, four high schoolers discover Jumanji, now morphed into a video game to adapt to the rise of technology. Sucked into the world as avatars played by Dwayne Johnson, Kevin Hart, Karen Gillan and Jack Black, they must return the jaguar’s eye to its resting place whilst avoiding antagonistic hunter, Russel Van Pelt (Bobby Canavalle).

Sounds like Power Rangers safari edition doesn’t it? But there’s more behind the shrubbery and rivers. Everyone’s a natural in their opposite avatar roles. The Rock playing against his weak nerd counterpart is a match made in heaven. And who’s manic enough to top Kevin Hart’s short-tempered (figuratively and literally) real world jock? How about Jack Black’s valley girl body swap. From beginning to end, he turns a dangerously worn out joke on its head for the whole adventure. It can get a little uncomfortable for families, but his commitment is so strong the PG-13 rating flies over your head. Bonus points for not locking the explorer to a food addiction. Even one of the Jonas brothers is decent enough to stand alongside this rag tag group.

The game is brilliantly updated with memorable mechanics from the past while prodding what hasn’t aged well over the last three decades. Though for something that’s been slapped with Sony products from The Last Guardian to cassette players it’s surprising that the board game didn’t evolve into a PlayStation disc for historical continuity. The effects feel unchanged since 1995, but because of the setting,it makes sense to look more digital in a television than in the real world.  But there’s one thing the prequel and book has that this lacks: dangerous animals. The heart of this game is besting the worst of the animal kingdom, but they’re overshadowed by motorcyclists from a cancelled Indiana Jones stunt show. When I think back to the original, I remember monkeys with gremlin instincts, a lion on a piano, purple poisonous plants, the rhino elephant stampede, a monsoon with crocodiles, quicksand, giant spiders and a global earthquake. But there’s barely any feral wildlife in this zoo gone wild. It feels less like Jumanji and more like Uncharted. The villain isn’t any better either. He has the power to control the animals at his fingertips yet never takes advantage of it. While the graphics in this are forgivable, the wasted villain isn’t, with or without the comparison to Jonathan Hyde’s memorable incarnation. Also the publicized tribute to the late comedian is mostly glanced over to be anything memorable. The video game mechanics work well, but to a fault when factoring in the green world.

Venting aside, Jumanji: Welcome to the Jungle is a worthy follow-up to the original even if the animalistic nature has been cut short. The charismatic cast brings the score up, the effects work well in the setting and the action makes it one of the smarter popcorn flicks. I do wonder what this would’ve been like as a stand alone series than a sequel to a well known property. But there’s enough of the spirit from the book to satisfy novel enthusiasts and more than enough references to the Williams ride to roll the dice on this. In the end, it did something different and ran with it, unlike it’s pallet swapped space sibling, Zathura.